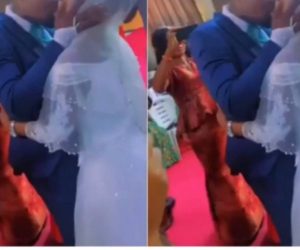 The pastor will be named “pastor of slap. This is however the funniest and embarrassment moment a groom encountered from a man of God who was called to bless the marriage.

Join Our WhatsApp Group
The African community has learned a lot from the whites. One of the things is their white wedding. A groom was very surprised by his wedding pastor when he slapped him after he heard the words “you may kiss your bride” in the church during their wedding.

He proceeded to conform to this ancient wedding ritual by locking lips with the bride, who is now his wife, but the pastor abruptly stopped him for probably overdoing it by giving him a knock (which looks more like an slap from our point of view).

This has not been one of the usual moment as it does not happen in churches. This new slap coming from the pastor to land on the groom appears to the the beginning of how some pastors are going to discipline grooms for over kissing during a wedding ceremony in church but question is, does it matter to slap a groom for too much kiss to his bride?
The video has sparked a huge debate on the internet as many netizens are not impressed with the action of the man of God.
VIDEO BELOW;
https://www.instagram.com/p/CWAcd29jI7d/?utm_source=ig_web_copy_link