Skip to content
Home
General News
Video: NAM 1 Did Not Rent House For Me At East Legon – Michy Reacts To Rumours 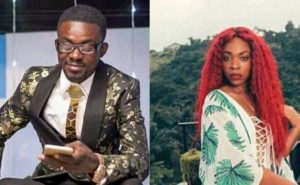 Thinking back, months ago, it speculated that the CEO of the dead MenzGold. And Zylofon Media, NAM 1 rented a house for Michy at East Legon. And also a bought trade fair for her after he signed her Ex boyfriend Shatta Wale.

The baby mama of the dancehall artiste, Michy has responded to those claims. And rumours that disseminated.

Speaking in an interview with Sammy Kay media, Michy refuted the claims and the allegations and said, I dey here if i get money to buy trade fair, will that not be nice?

She continued by quizzing, has he (NAM 1) bought trade for his wife, let’s be real, let’s be realistic, he is a businessman here, he is not out here dashing money to people. He was working with my Ex so if i had to meet him once along the line, it’s normal.

Michy also said she has no idea if Shatta Wale who was her boyfriend was signed onto Zylofon Media because of her when she was asked about it.

“I don’t know about that”, she responded.

Tags:Video: NAM 1 Did Not Rent House For Me At East Legon – Michy Reacts To Rumours