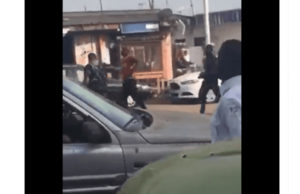 The Police Service has revealed that seven people have been arrested after two gangs from Nima and Mamobi clashed on Tuesday.

According to the Police, two people sustained gunshot wounds and currently are on admission responding to treatment.

ACP Kwesi Ofori, Director of Public Affairs of the Police Service said they are on the search for the leaders of the two gangs known as Kumordzi and Bomba.

“Nima witnessed mass violence around 3:30 pm yesterday [Tuesday], and the Police quickly intervened. The violence spread across some sections of Nima and we managed to stabilise the situation. Seven persons have been arrested. Five are presently here with us, and the other two are on admission at the Police hospital,” ACP Ofori stated at a Press Conference.

The two rival groups reportedly clashed after one group attacked a member of the other group when he visited the Mamobi neighbourhood to transact some business.