A terminal examination prepared for basic six schools within the ‘Keta’ municipality has reportedly been suspended after the 14th question of the Ewe examination paper had words attacking a public figure.

Many have read meaning into it saying it was directed at the President.

A dedicated supporter of the NDC political party circulated a copy of the examination sheet in a social media post sighted.

He indicated writing of the test by all public schools in the Keta municipality has been withheld.

According to him, the directive for the suspension of the terminal examination was initiated by the Municipal Director of Education.

“All public schools in Keta should put on hold the writing of the test items currently ongoing. The rest of the materials should be locked up until further notice,” the National Democratic Congress (NDC) supporter stated.

“There’s a claim that the Ewe paper’s question 14, had vague language used on a highly prioritized individual in Ghana” the Facebook user wrote on his Facebook timeline.

Was this question set out of the frustration resulting from the suspension of terminal examination for basic schools? 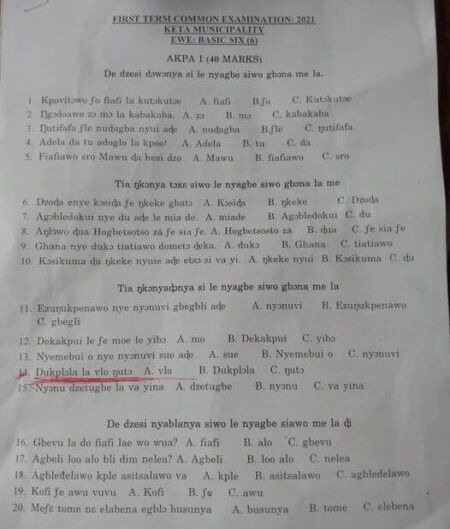