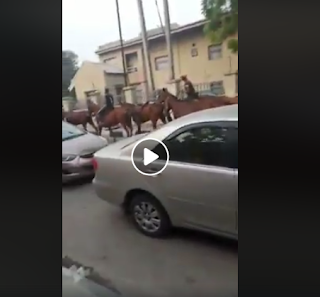 Nigerians have taken to social media to react to viral videos of horses which were rolled out by its owners to convey Lagosians to their different destinations, following a ban on commercial motorcycles popularly known as Okada and tricycles popularly known as Keke Napep by the Lagos State Government.
Recall TheNation reported earlier that the Lagos State Government on Monday, January 27, proscribed the operations of Okada and tricycle riders in six local governments and nine local council development areas of the state. They were also banned from plying 10 major highways and 40 bridges and flyovers across the state.
Days after the ban was enforced by security operatives, some social media users have disclosed that horses are now the new means of transportation in Lagos. There is also a video to back up the claim.
See the video below:
See reactions on twitter below: